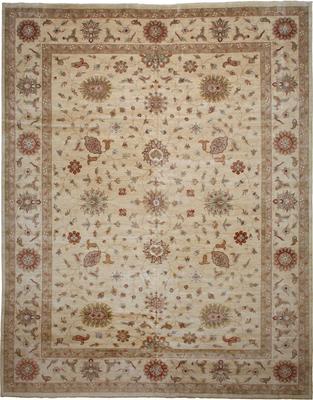 Skip to the beginning of the images gallery
More Information
Description

While there was Gilded Era in America, the West showed an interest to invest in Persian rug production directly. A British-Swiss company was pioneer and gave its name to this sort of goods: Ziegler. The company started its activity in 1883. Its parallel interest was Persian opium cultivation.

who were expanding their workshops around Sultan-Abad at that time. So Ziegler and co., too, established their workshops there, followed by American companies, initiating a new type of designs in Sultan-Abad (nowadays called Arak). Arak is a city located in west-central Iran,

They learned the ropes from Tabrizi merchants surrounded by mountains amongst which lay several valleys and plateaus, home to lots of villagers and clans. Farahan, Mahallat (Mahal) and Saruq could be mentioned as some of these rural areas. Each of them is a well-known title for rugs and other hand-woven goods.

Western investments made the second turning point in Sultan-Abadâ€™s rug history. The first one occurred under the rule of Nader Shah (from 1736 to 1747) who made Herati designers and weavers move to this region. They brought their famous Herati style to Sultan-Abad and its surrounding and kept the style as the main tradition of the area till the arrival of European companies.

These new merchants went after their Western tastes, which was forming under the influence of artistic movements such as Art Nouveau. The new products enjoyed Persian patterns and motives but in different total designs. The shapes mostly followed curvilinear designs but in a somehow rectilinear way. The result was something similar to loom-drawings on graph papers which was a shake-up for that time.

Central medallions were replaced by all-over designs and rich palette of traditional Persian rugs was minimalized to match every possible place and decoration.

What preserved firmly was, of course, professional weave of Persian artisans, in addition to high-grade wool dyed with durable natural dyestuffs. Both single and double-wefted knots were common, mostly asymmetrical (Persian).

During the first decades of the 20th century American companies overtook their European forerunners in every financial aspect and the US became the main rug customer.

Americans had their own preferences. They didnâ€™t much care for accurate and flawless designs. They liked big-sized pieces and as well as long-piled fleshy ones. Their workshops were mostly in a village called Saruq which gave ultimately its name to the high-grade American produced pieces. Even the Ziegler and co. started to produce its own American Saruqs.

This Ziegler Mahal rug has a large repeating pattern on the ground, composed of squares, lozenges, belts and flowers, with big floral motives on the joints and small ones in the middles.

The margin has five parts: the central part as the wide margin and two narrow margins, with similar patterns, on each side of it. Two rather large flowers and a jointing stem serve as the main motif inside the wide margin.

There are also some tiny flowers and leaves between the main flowers and on the stem. Warm hues such as orange and red have been moderated on the dark blue of the ground and in companionship of modest green and gleaming cream.