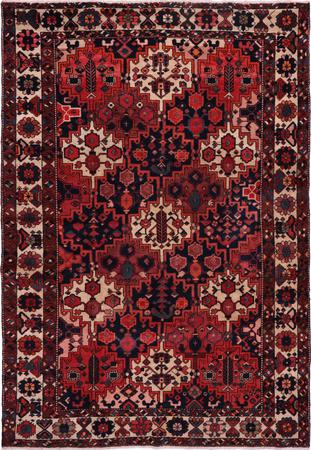 The Bakhtiari is an Iranian tribe, a subgroup of the Lor people. Actually, there is no ethnic difference between Bakhtiaris and other Lors. This naming backs to the Safavid era. Because they showed courage in the wars between Iran and ottomans and also their role in defeating the Portuguese occupiers, the Safavi King called them Baktiar, which means fortune companion. The Bakhtiari tribe includes two branches: Char-Lang and Haft-Lang, and both have their own subgroups. This tribal structure, also, have been formed at the Safavid era due to the social class structure and the taxation system of the time. They speak the Bakhtiari dialect, a southwestern Iranian dialect, belonging to the Lori language, which is a subset of middle Persian language. Nowadays the Bakhtiaris inhabit in five southwestern Iranian provinces: Chahar Mahal and Bakhtiari, Khuzestan, Lorestan, Bushehr and Isfahan. Chahar Mahal and Bakhtiari is the heart of the Bakhtiaris habitat, which is located on the hillsides of the Zagros Mountains.

The Zagros Mountains contain several ecosystems. Some parts are forest steppe having a semi-arid climate and other parts (the Chestnut forests) are mantled with rainforest and there are rivers, lakes and waterfalls. Some of the earliest evidence of wine production has been discovered in the Zagros Mountains, and some believe these hillsides are the very first place of the horse domestication. At least, there are evidences enough to the claim the most ancient horse culture formed in this region by the ancestors of the Lor people. The Chahar Mahal and Bakhtiari province has been the pathway and often the settlement for several nomads and settled people, such as Kurds, Lors, Khamse, Arabs, Qashqai Turks and Armenians. Its neighbor provinces are Isfahan, Khuzestan, and Fars. The province has been under the rules of Haft-Lang Khans (thanes) and its capital is Shahrekord. The result of the combination between Nomadic and settled people is obvious in the woven pieces of the region. With their designs, patterns, colors and even the weaving techniques, Bakhtiari rugs mirror this cultural fusion. Although each of the Bakhtiari clans have had its own patterns and designs and the designs were easily recognizable, but since 200 years ago the patterns have started dialogues, making a range of various designs. What we know as Bakhtiari rugs are not woven by the Nomads, but by the settled Bakhtiaris of city and villages of the The Chahar Mahal and Bakhtiari province. The best Bakhtiari rugs are made in these cities and villages: Chaleshtar, Shalamzar, Saman,Hinegan, Qahfaroq, Boroojen, Ashgaftak, Pirbalut, Arjang, Vardanjan, Boldaji, Faradonbeh and Ardal.

Technical aspects and the structure of Bakhtiari rugs

Sheep wool is the main raw material in carpet production. The wool used in bakhtiari rugs is hand- spun and of high quality. Bakhtiaris shear their sheep once a year, generally in April. Because of the influence of other tribes, the quality and styles of weaving differ part to part in the province. Among bakhtiari rugs you can find both wool and cotton warps. Most of the Bakhtiari weavers knit symmetrical but in some regions like Hinagan and Nasrabad the common knot is asymmetrical. The ways of weft- passing are also diverse. Most of Bakhtiari rugs are uni-wefted, but in Shahr-e-Kord du-wefted rugs are also woven. Weaving du-wefted rugs have been started since 80 years ago. Except the looms which the Carpet Cooperation of Iran offers to the weavers, the most other looms in Chahar-Mahal and Baktiari region are horizontal, and even big sized rugs are woven horizontally. The number of rajs is normally between 17 and 20, but in recent years this number has risen up to 40. In the past, the carpets were mostly flat-knitted but little by little the round-knitted (Lool Baf) rugs have been replaced, and nowadays both ways of knitting are common in Bakhtiari. Bakhtiari rugs are various in sizes. Small and medium are more common but there are also rugs in big sizes and you can find among them square rugs too. Wide and narrow Runners and Kallegi are also woven in Bakhtiari regularly.

Dyeing and painting of Bakhtiari rugs

In the past, women from Bakhtiari nomads gathered and dried natural plants and derived colorants from them by boiling. By adding sour pomegranates juice they were able to make the colorants mordant. The result was fixable dyes, and vivid and wild colors on the bakhtiari rugs. Bakhtiaris use gray wool instead of white, which gives dark tonalities. The crimson and green of Baktiari rugs are their main characteristics in comparison with same colors in other Iranian rugs. They use also black instead of dark blue and cobalt-blue. Yellow, which is very common in Bakhtiari rugs, is obtained from reseda and rubia. Rugs with self-colored wool are also common in Bakhtiari. Rugs with these natural colors are known as five-colored (white, milky, gray, chestnut and brown), which was a famous description for Baktiari rugs during 60s and 70s in Europe and America. 'Bibi-Baf' is a category in Bakhtiari rugs, which namely means Lady-Woven. Bibi means lady at all, and in Baktiari culture it is a title for wives and daughters of the Bakhtiari Khans (thanes). In the past, there were rug-weaving workshops under supervision of these bibis. Some of the bibis were themselves weaver too; actually, rug weaving was a common side interest for the Iranian ladies, including the Bakhtiari bibis. But of course, the main products of the Bibis' workshops were woven by skillful workers. Bibi-Baf rugs were standing on a high level of quality and color. Kheshti (brick) and Sarvi (cedar) were the most common designs in these workshops. The last generation of Bibi-Bafs was woven in 1930. In this year, the Khanate system was annulled under the order of Reza Shah.

Designs and patterns of Bakhtiari rug

Bakhtiari designs are mostly broken and the rugs are categorized as nomadic or village-woven. In the past, there was no prior design and Bakhtiari rugs were all improvised-woven. Since 80 years ago Bakhtiaris have started to make design for some of their rugs. Because of proximity between Bakhtiari people and other Lors and also Qashqais and partially Armenians, the Bakhtiari rug designs are to some extent under the influence of their designs. But the main original Bakhtiari design is Kheshti. The Persian word 'Khesht' means brick or adobe, which is a basic material in Iranian architecture. Iranian bricks are mostly square and the square frames in Bakhtiari designs justify the appellation. 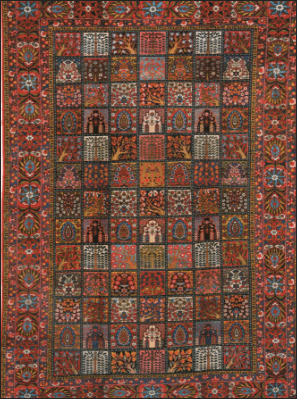 The square frames of a Kheshti design are arranged orderly side by side, and there is a pattern inside each of them, such as a splendid branch, a bush or vase full of flowers or birds, a gazelle, a panther and other animals, or a cedar tree. But the most prominent pattern is the weeping willow, which have become a representative for the Bakhtiari rugs. 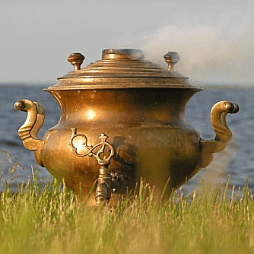 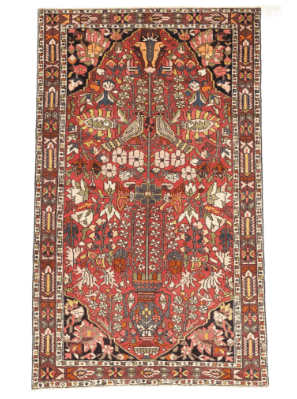 In terms of design, the Bakhtiari rugs are too various. Some experts even categorized some of the Qashqai, Lori and Armenian rugs under the Bakhtiari title; the cultural combination in the Chahar Mahal and Bakhtiari makes it reasonable. But the original Bakhtiari rug has its own elements and aesthetics as mentioned above.