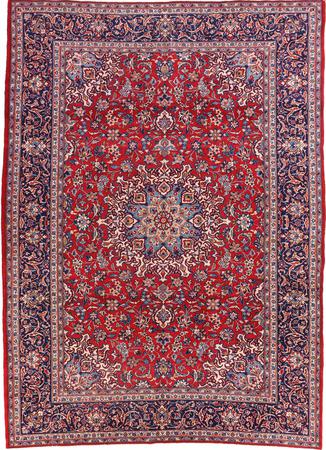 They say a caravan of camels burdened with gold and silver was sent from Shah Abbas court in Isfahan to Najaf, where the shrine of Imam Ali is, to be spent for the holy city. But not far from Isfahan’s gates the camels refused to go further. Meanwhile Sheikh Bahaei, Shah Abbas’ wise counselor, saw Imam Ali in his dream saying the gold and silver should be spent on the spot the camels stood. Accepting the dream Shah Abbas built a city on the spot and called it Najaf-Abad.

Technical aspects and the structure of Najafabad Rugs

Najafabad rugs should be categorized as city-woven rugs that means professional weavers have woven them in workshops with loom-drawing. Looms are mostly vertical in such workshops.

Dyeing and painting of Najafabad rugs

Red is the dominant ground color in Najafabad pieces. Dark blue or beige are used for margins. Beige could also be used for grounds, if so the margin would be red. A charming indigo or light lazuli is used in some Najafabad pieces mainly for corners.

For patterns Najafabadi weavers use light tones to moderate the total appearance. Shades of cream, beige, ivory, buff and khaki are predominant. Light and dark blue, yellow and green are also used as secondary tones.

Designs and patterns of the Najafabad rugs

Najafabad is considered a source for central medallion designs. Najafabad medallions are usually eight-pointed stars, rather small in comparison to surrounding patterns, shining in the middle of oval-shaped grounds which are limited by bow-shaped corners. Curvilinear patterns fill the grounds, including some large ones such as Shah Abbasis and some tiny florets. Najafabad margins enjoy accurate division, and their edge-makings are well-ordered. The main pattern used in Najafabad wide margins consisted of two flowers, mostly Shah Abbasis, chained together by rotating Eslimi (Arabesque) and Xitai bands.