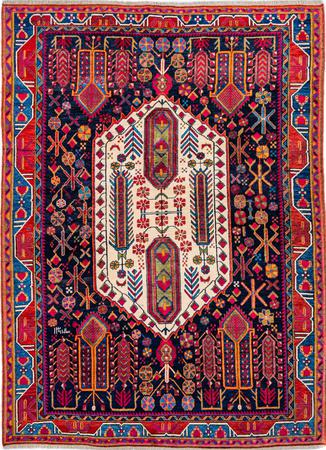 Sirjan (sirjoon in Kermani accent) is the second big city of the province after the city of Kerman, located at the western frontier of Kerman the province, embraced by the very beginning of the Zagros Mountain.

This very beginning was actually the journey's end for the Turkic folks who found their way through Zagros, being ultimately settled on the high pastures of Sirjan. These tribes mostly belong to Afshars who are the biggest group of Turks of Iran, being moved several times to southern parts of Iran by Safavid Shahs and also during the reign of Nader Shah the great, who, himself, belonged to a branch of Khorasan’s Afshars.

These folks brought their weaving styles to the region, and Sirjan, locating in the middle of Kerman and Shiraz, play its role as the central bazaar for woven goods made by tribes of Both Kerman and Fars provinces. Piled products are known widely as Afshari and Kilims are sold under the name of Sirjan.

The Stone Garden in Sirjan

These tribal and village-woven Kilims are amongst the best Iranian flat woven goods. Shireki Pich, or simply Shireki is a term for these pieces used by the weaver themselves. Suzani (namely needle-work) is another term used wrongly by merchants because of the similarity between these pieces and needled Kilims of north-western Iran. Being known as a cultural heritage by UNESCO, Sirjan Kilims’ world reputation increased rapidly in recent years.

Technical aspects and the structure of Sirjan Kilims

The distinguishing feature of Sirjan Kilims from other Iranian Kilims is in their knotting method which give a rather piled appearance to them. In ordinary kilims wefts make patterns but Shirekis’ wefts, being invisible on Kilim’s surface, only fasten the warps.

The main raw materials are wool and kork or Kerman wool. It is a fine and thin but not fragile hair sheared off a breed of goat native to Kerman. Shearing must be done in spring and just the soft hair of inner layers (mostly under necks) are gathered as kork.

Since two last decades a kind of rug became popular in Sirjan called Shireki-rug which is a combination of piled and flat woven. The total structure of these pieces is same as Kilim but with piled patterns. The result could be described as a kilim with bulging patterns which has a special touch under feet.

Dyeing and painting of Sirjan Kilims

Living in Kerman province made Turkic tribes familiar with the wide range of colors used in city workshops of Kerman and Ravar (Lavar). Using the same dyestuffs, obtained from Kerman’s nature, nomadic weavers prefer deeper hues rather than pastel ones used by their neighboring city dwellers.

Designs and patterns of Sirjan Kilims

Like in every Kilim weaving areas, Sirjan weavers weave their Shirekis without loom-drawing, relying on memory and momentary impressions, or simply with observing their old pieces. Although the nomadic way of life is fading between Kerman’s Afshars, they have maintained lots of their heritages including Kilim patterns and designs which could be traced to Azerbaijan, Caucasia and Asia Minor.

Lattice, Xeshti (framed) and striped (both vertical and horizontal) have been favored designs, which were filled with repeating geometric patterns such as diamonds, octagons and hexagons or simplified bestial and herbal patterns. Today you can also find pieces with diagonal strips or geometric medallions.